Raman Kant also has the distinction of establishing the country’s first Rural Rain Centre in village Poothi at Meerut with the active support of the local leaders.

Keeping in view, the urgency of enlightening the community and making efforts at the grassroots level in order to meet the growing need of water demand, Raman Kant initiated his work towards water conservation in the year 2004. As such, he formed NEER Foundation with an objective of creating awareness on various issues related to water involving the community in finding various solutions for sustainable future. With a contribution of about 120 articles published in the Hindi national dailies, magazines etc., Raman Kant has a wide range of experience with a deep understanding of various issues concerning water across the country.

As the Founder Director of NEER Foundation, it is the belief of Raman Kant that environment problems can only be addressed adequately if local people are involved in decision-making at all levels and have control over resources. Lead by him, NEER Foundation acts as an independent, not-for-profit making voluntary organization working towards environment protection and management by means of water conservation and rural development. NEER Foundation is involved in research, campaigns, grassroots level practical work and advocacy on issues related to environment and human rights.

As a public interest organization, NEER Foundation has focused on strengthening the community through their active participation to achieve sustainable development. NEER Foundation has the distinction of bringing out the first detailed census of natural water resources structures entitled “Talabo ki Stithi”. The 35 pages study report has earned wide appreciation by the National and international organizations like CEEW and others. As such, it will be highly beneficial for the country. NEER Foundation has also constructed a number of natural water resources structures like ponds (tanks), JOHADs and wells in the villages in Meerut district with the active participation of the community. The unique work for water conservation undertaken by the community by offering shramdaan (manual labor) has earned national popularity. The organization for the first time since independence gave a call to the community to clean the 5000 years old historical Gandhari Talaab in Parikshatgarh, some 20 kilometers from Meerut. It was at the behest of Raman Kant that the Students came forward to offer shramdaan along with the farming community and traders of Parikshatgarh so as to clean the pond by de-silting it.

Raman Kant also has the distinction of establishing the country’s first Rural Rain Centre in village Poothi at Meerut with the active support of the local leaders. The Rural Rain Centre is a water literacy spreading center with an exhibition which portrays basic issues concerning water with the support of colorful panels. It also has a small library with books, cassettes, CDs and video films on water. School children, farmers, engineers and various civil society groups pay a visit to the Rural Rain Centre regularly. The Rural Rain Centre has a live model of Rooftop Rainwater Harvesting so that the community gets sensitized on the important issue of water conservation. The Rural Rain Centre has been visited by the former Union Minister and Member of Planning Commission Mr. Sompal Shastri, Peasants’ leader Ch. Rakesh Tikait and many scientists. Meerut Development Authority (MDA), UP Avas evam Vikas Parishad, Minor Irrigation Department, Central Ground Water Board (CGWB), 40 Trainees of Indian Forest Service batch 2014-15, State Ground Water Board (SGWB) of UP, UP Jal Nigam and other departments have been sending their engineers to visit the Rural Rain Centre which is the first of its kind in Northern India. Raman Kant and his associates have taken the torch of water conservation to more than one lakh people in the urban and rural areas of western U.P. It is just because of his efforts that the district plan of Meerut enhanced their water conservation priority particularly in rural areas based on the census of NEER Foundation. According to Raman Kant ”I would like to see the day when people at least in my region have access to pure drinking water”. He further adds that “We would strive to bring back the lost image of water scarce and contaminated drinking water region to water sufficient and pure drinking water area”.

Raman Kant in the year 2006 took the pledge to clean the highly polluted Kali River (East), Hindon River,Kali River (West) and Krishna Rivers. As such, a massive signature campaign supported by PADYATRAS and awareness programs, the Kali River issue was undertaken under his leadership. As a mission of his organization, Raman Kant has undertaken the responsibility of motivating the community to adopt Rooftop Rainwater Harvesting (RWH) in urban areas. He was also instrumental in establishing an RWH model at the near about 200 buildings in Meerut and BDS public school Meerut in western U.P. Raman Kant has delivered power point presentations and has addressed more than 100 meetings on the important issue of water conservation in the different parts of the country and out of the country like Turkey, UAE, Thailand and Nepal.

Since the whole of Western U.P witnesses excessive use of chemicals and pesticides. Hence, there is a great loss to the fertility of agricultural soil here. Worried about the threat to the agriculture in Western U.P, Raman Kant decided to initiate organic farming along with the promotion of traditional ways of farming. He is the pioneer of promoting organic farming in the area covering 50 villages in Meerut district and much more in the adjoining districts of Bijnor, Baghpat, and others. Farmers have been taught about the various methods of preparing organic manures, bio-pesticides, and other biotechnologies which serve as inputs in organic farming. The former union minister Sompal Shastri had visited Meerut along with his technical advisor to see the grassroots level work which Raman Kant is promoting in the area. He appreciated the work being done by him. Raman Kant has participated in a number of National and International conferences on organic farming and has delivered presentations on the subject. He is among the few environmentalists in the country who has brought the threat of POPs to the surface by organizing meetings and conducting research in the community.

As a visionary, Raman Kant also would like to see that Uttar Pradesh formulates its own River policy. After participating in a number of meetings with the Ministers and Government Officials related to water he has also contacted a number of experts to extend their supports towards the formulation of the River policy in U.P. Known across the country as a JAL DOOT (water warrior) Raman Kant has inducted 500 JAL DOOTS and activists who have volunteered themselves towards the efforts of water conservation. He through his organization regularly brings out a bimonthly newsletter on water entitled PARYAVARN SANDESH which is popularly known throughout the country. Raman Kant is a well-known name in the field of water conservation and wants to serve the nation by his activism at the grassroots level efforts so that the water problems are solved at the local level.

Today, the team of ICICI Foundation reached Antwada village to see the work of Kali river improvement. The team was inspected by Shubham Kaushik and Mastram Nagar of NEER Foundation. There they tried to know the development work being done for the river and to know the future projects related to conservation. 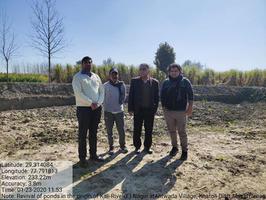 The Director and Deputy Director, CWC along with Raman Kant of Neer Foundation conducted a ground level supervision of the river conservation work done by Neer Foundation. They expresses gratitude for the work done at the right speed. It is worth mentioning that Raman Kant has done a lot of work for the salvation of river Kali in Meerut at its source of origin and also for the renovation of the ponds in Muzaffarnagar. 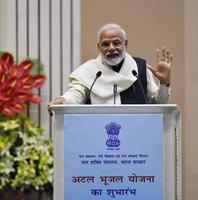 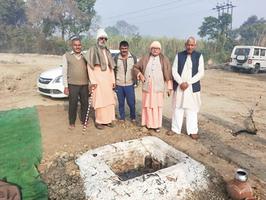 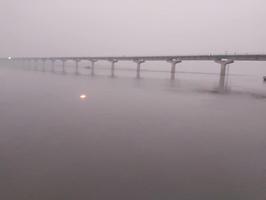 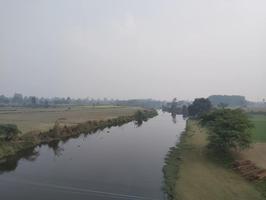 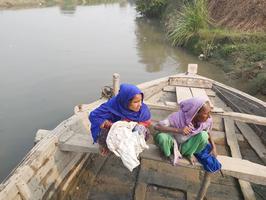 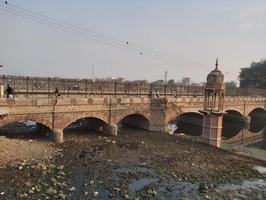 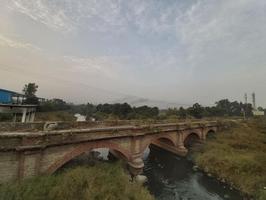 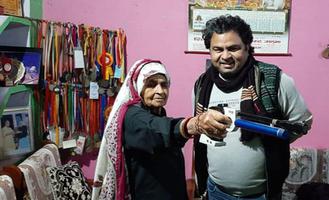 River Discussion organized at the origin of Kali river

A river discussion was organized in Antwada today. Hundreds of villagers including minister of state, GoI Dr Sanjeev Balyan participated in it. Plantation was also done on this occasion. Dr Balyan included Antwada in the SANSAD ADARSH GOAN scheme. 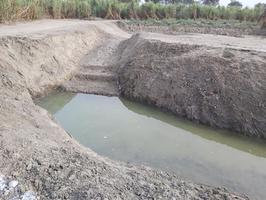 For Clean Kali..Green Kali campaign, the work of revival of the East Kali River origin is continuing rapidly. The pond is also ready in the village Antwada. Today also held a meeting with the villagers in the village.

Mr. Ramankant Tyagi awarded by the Green Society of India

Today, Mr. Ramankant Tyagi, who is working for river conservation & environment for a long time, have been given the “Person of the Year Award” for the work of river conservation by Green Society of India in Delhi. This award is given in the World Environmental Expo in Pragati Maidan. His selection was done by Padamshree Chandi Prasad Bhat and Dr N Subba Rao for this award. 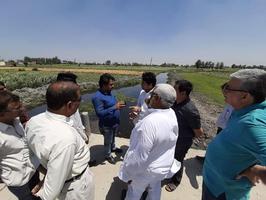 In the efforts of reviving two rivers of Amroha district, Ban and Sot, a detailed strategy for their improvement was made on the invitation of Mr. Ajay Tondon with his team and the District Administration. Member of NEER Foundation Shubham Kaushik will also be with him on this occasion. 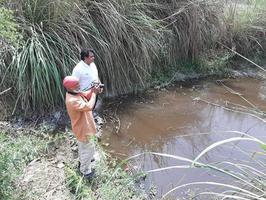 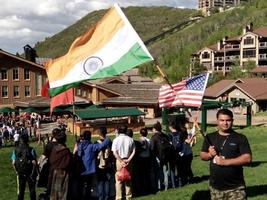 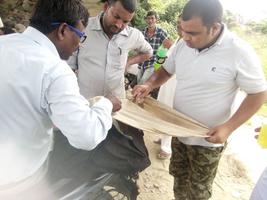 On the banks of East Kali 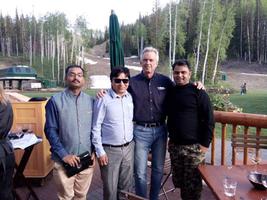 At the waterkeeper Alliance with Dr. Venkatesh. 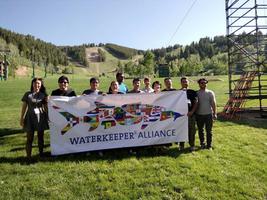 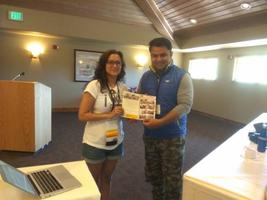 At the Waterkeeper Conference. 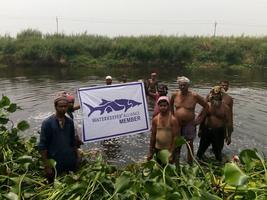 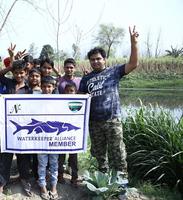 On the banks of the East Kali River. 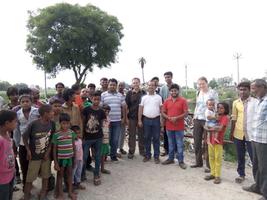 With the associates and volunteers. 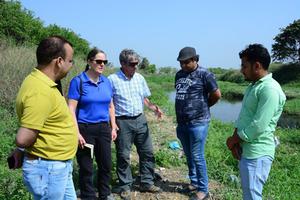 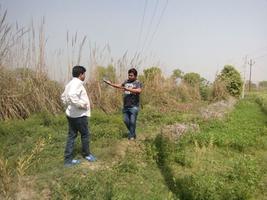 On the banks of the East Kali River 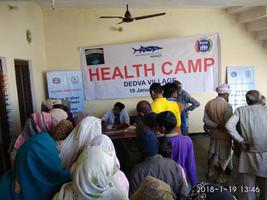 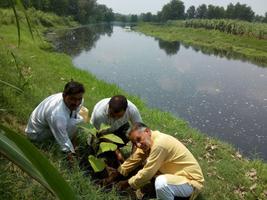